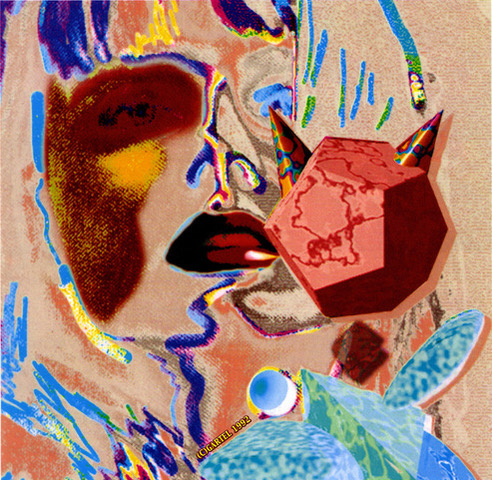 LAURENCE GARTEL, IS KNOWN TO THE WORLD AS THE “FATHER” OF DIGITAL ART FOR OVER 40-YEARS.

His career started working side by side with video guru Nam June Paik at Media Study/Buffalo in upstate New York. He taught Andy Warhol how to use the Amiga Computer in order to produce the album cover for Debbie Harry (Blondie). Growing up in New York City during the Punk Rock era he was friends with Stiv Bators, Sid Vicious, Joey Ramone, Wendy O. Williams, and exhibited his work with Robert Mapplethorpe. Creating Digital Art before the birth of the personal computer, his work has been exhibited with the Museum of Modern Art, Long Beach Museum of Art, Princeton Art Museum, Norton Museum of Art as well as included in the permanent collections of the Smithsonian Institution’s Museum of American History, Bibliotheque Nationale Paris and Victoria and Albert (V&A) Museum, London.

Gartel has traveled the world exhibiting and projecting his work in Australia, Spain, Germany, Italy, as well as going to India, creating a Bollywood Music/Video for Universal Entertainment. He has been commissioned to produce artwork on Britney Spears, Justin Timberlake, Red Hot Chili Peppers, as well as for corporations such as Coca Cola, Philip Morris, Walt Disney, National Basketball Association, Gibson Guitars, Bang & Olufsen, and known to most for his ABSOLUT GARTEL ad for Absolut Vodka.

The year 2015 could have been its own book. Gartel was the Official Artist of the 57th Annual Grammy Awards, Los Angeles. He “wrapped” the large-scale, one of a kind Grammy Statue with his Digital Art printed to vinyl right here in South Florida. He was the Artist of the NASA MMS Mission, at Kennedy Space Center, as well as being the Artist of the Newport Jazz Festival wrapping a one of a kind Trumpet to honor the career of Miles Davis. Gartel unveiled the First National State Art Car at the Capital building in Concord with Governor Maggie Hassan, reading letters of Commendation from the House of Representatives, Senate, and Congress. Gartel participated in the Los Angeles Street Art Fair creating a commissioned Dodge Viper Art Car and was the Visionary of the 3D Print Conference in Santa Clara. Gartel showcased his 1978 groundbreaking “Self Portrait” film at the 7th Annual Cairo International Video Festival. He finished the year creating the Official Artwork for the Monaco International Film Festival.