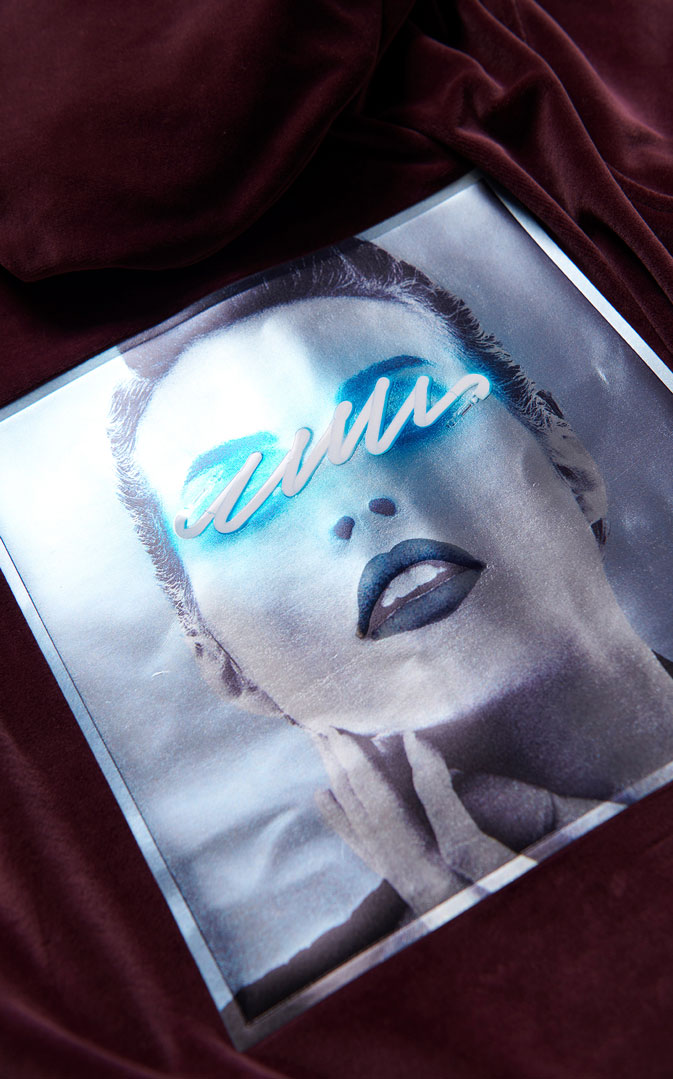 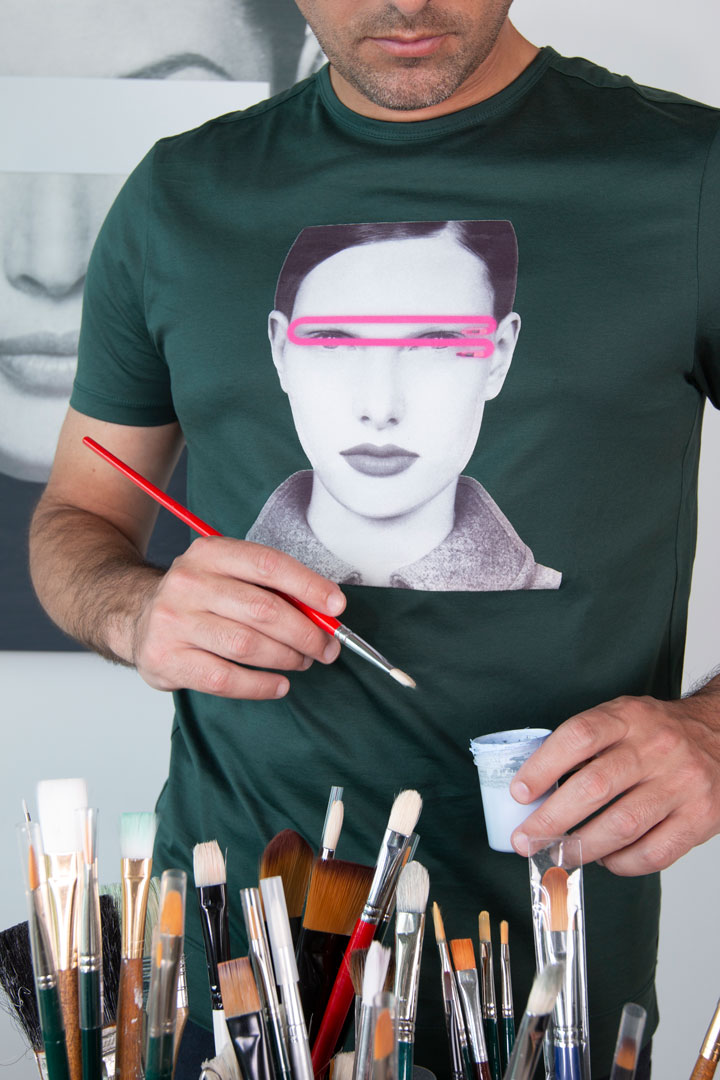 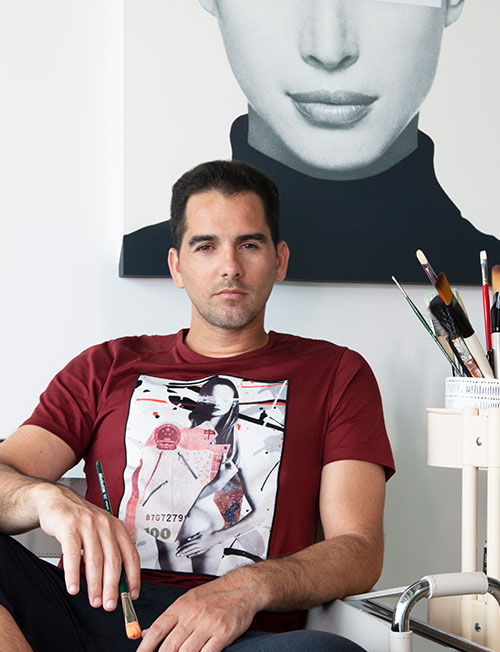 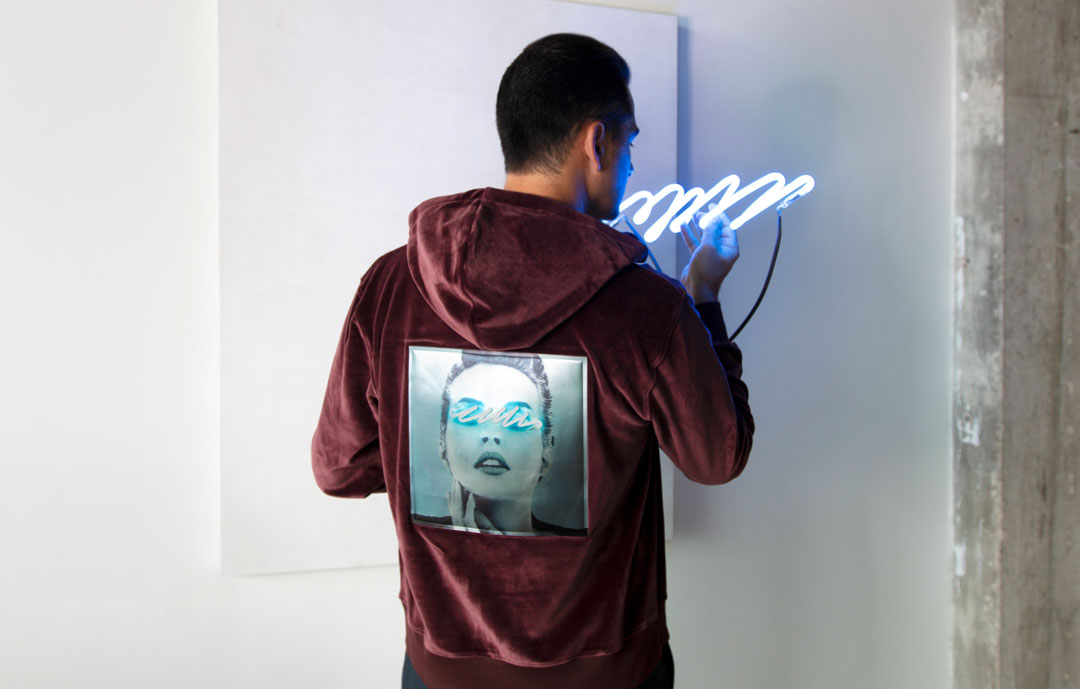 Where backgrounds become so important in the emergence of true talent, our Journal inserts often unveil different journeys and experiences that have common threads and coming togethers, but more often than not a binding similarity of self expression and determination. Here we speak to one of our newest collaborators, Javier Martin about what has brought him to the forefront of contemporary art.

Born and raised in the Spanish district of Ceuta on the North African coast (bordering Morocco) Javier had a ‘non-traditional’ upbringing, moving to Malaga as a youngster with his father - which incidentally is the home of Picasso.

However, his talent shone through from an early age. He claimed his first monetary prize for ‘best young artist' after taking part in his first art competition at the age of 8 years old, in Ceuta - still remembering his own interpretation of a postcard that acted as his brief. “It was a dancer on a table of ceramics, but none were broken,” says Martin “I have looked recently at the meaning behind why I created that image, it could be many things, perhaps in the subconscious at that time,” he adds.

Another show followed where Martin received a special mention for his work and that feeling of how he felt after taking his first art class is captured fondly, “It was like and explosion ‘BOOM’, I knew immediately that this was the outlet for me to let whatever issues I had out - and lets face it, everything seems like a big deal at that age.”

With art providing a freedom that a young Martin found hard to express elsewhere, he spent his formative years working in bars and restaurants in the town of Malaga, saving his money to fund his creativity through art “I knew I wanted to work in the creative industry, but I didn’t have the qualifications or background to back it up,” says Martin "I would take on jobs that had a creative side to them, one being carpentry and then various factory jobs and understanding materials. I was then asked by a interior designer who had seen my work to create pieces for homes -  I found a bit of niche for myself.”

Following colour schemes and a brief, Martin’s creations were often accepted quickly in a process that could normally take on 3-4 big changes. The young artist selling well and working within the sector for four years before galleries started to contact him locally and from places such as Barcelona to collaborate. Then during summer of 2012, Martin participated in his first gallery exhibition in Asia at Pantocrátor  Gallery in Shanghai.

“I do feel an affinity with the Asian culture and really enjoyed living there for four years (Hong Kong and South Korea) before coming to the US. I still like to visit with various projects and exhibitions and have some coming up later in the year,” he says.

Perhaps focussing on his 'Blindness’ collection of work helps to understand the mind-set of Martin, who questions those things around him utilising photography, collages, sculptures and lighting to create pieces that generate true talking points to those who see it.

With an impetus on the world of advertising and how we are fed as consumers a constant flow of ‘this is perfect’ and ‘this is who you are’ messaging, Martin had a platform to play with the simple idea of covering the eyes - effectively the only ‘real’ element to who were are as humans and what lies deeper than just materialistic things.

“I’m not here to say anything is right or wrong, but to question and challenge everyday things and to look deeper and beyond the surface to me is truly fascinating,” he says. “Take for example the use of neon light to cover the eyes. We attach shiny, bright things to ‘good’ things, but with this concept it is used as a false attraction to something that possibly isn’t really there.”

Further elements to the project, which began some 13 years ago, has seen Martin play with re-conceptualising the repeated, recognisable all-over print of Louis Vuitton to become handguns and grenades (which people are obsessed with when they see it) as well as removing faces from neon art so people become the ‘face’ themselves.

“I was originally really taken by the work of poster artist Mimmo Rotella, which inspired Blindness in the way it was conceived. I would say that all my pieces are connected within the collection, in terms of the thought behind what people are seeing. It’s interesting to destroy the concept of something to create maybe something nobody wants."

Artists can sometimes be described as introverted extroverts, Martin is perhaps unknowingly of this characteristic. Always seeing himself as different and looking at life differently from others, but confident enough to be the person that visually attacks and challenges.

Following shows at Art Basel Miami and in Brooklyn, New York from his base in Spain, Martin found himself living full-time Stateside, holding exhibitions at David Zwirner Gallery in New York as well as his solo show at Andong Arts & Culture Centre and with a global footprint in galleries including Masahiro Maki Gallery in Japan and Mathew Liu Fine Arts in Shanghai.

“People often question why I live in Miami because of the superficial aspect to the perceived life here, but it is merely a base for me and for me to work on my art. I love the weather too, much more than New York,” he says.

With numerous projects in the pipeline that have obviously been slowed by the global pandemic of Covid-19, Martin is excited to be partnering with LIMITATO, a project he says has taken almost a year to come to fruition because on paper, doing ‘something like this’ is detrimental to his whole ethos.

“I met the guy in Miami and we have been speaking for some time,” Martin adds “For me to merely put my work onto a T-shirt would not be what I’m about, it doesn’t have substance or a deeper meaning, however with LIMITATO it does. This has been conceived and thought through on a different level, where Wearable Art is reaching a new audience and where we can interact as creatives with people to give a better insight into why these pieces have been born.”

Javier Martin is clearly a complex and interesting character, his latest project in Asia looks at covering the eyes of K-pop stars who are the antithesis of ‘looking under the surface of appaearance'. “This is going to be something very unique and interesting to do. Again questioning the images that we see.” This along with his biggest project to date, which will be his solo show at Seoul Museum.

Javier Martin will be part of the LIMITATO Curator’s Programme where we create content to act as a window into the world of fascinating indivuals and their lives utilising Wearable Art to help the dynamic of the story.

For now, we say goodbye to Javier and thank him for speaking to us, but we will be seeing him very soon.